Winba = Fire, the Wattleridge Fire and Seasons calendar, has been developed through collaborative research between Banbai traditional owners and PhD researcher Michelle McKemey. The Fire and Seasons calendar uses ‘biocultural indicators’- noticeable, predictable, seasonal events that may be culturally significant- to tell us when the seasons are changing, and when it is a good time to burn.

These biocultural indicators have been identified from the long term knowledge of the Banbai traditional owners, observations and experiments undertaken by the research team and information gathered by the Firesticks ecologist David Milledge. For example, we know that the weather is warming when the wattles start to blossom and the snakes become more active. In 2015, a nearby prescribed fire got out of control when the native clematis was flowering abundantly, so perhaps in future when we see the native clematis flower, we will know that it is too late in the year to burn. When we see the lyrebirds and the echidna breeding, in the cool time of the year; that is a good time to undertake low intensity burning.

The calendar also presents what we know about changes throughout the year, such as migratory birds visiting during summer (they are smart enough to leave before winter comes), many species of wildflowers blossoming during the warm months, bush tucker species that can be harvested at certain times of the year, and changes for species that are important to us such as the glossy black cockatoo, echidna and black grevillea.

The lyrebird and echidna breeding season is a biocultural indicator that it is a good time to burn.

Weather conditions throughout the year are also important. August, September and October can be very windy which can make it difficult to burn. From April onwards, the frosts start which cure the grass and make it easier to burn. Sometimes in the middle of winter (July) it can be so cold a fire won’t go. January and February are particularly dangerous months for wildfire which can burn large areas of heavily wooded forest.

Collaborative pre and post fire monitoring between Banbai rangers and Michelle McKemey was undertaken prior to developing the calendar.

Threatened species including the glossy black cockatoo and black grevillea are culturally significant species to the Banbai Nation.

Most importantly, the Fire and Seasons calendar shows that Wattleridge IPA is Aboriginal land which is being managed under international conservation standards by the Banbai rangers, and that the use of fire is a significantly important cultural and environmental management activity which can have multiple benefits.

The idea of a fire and seasons calendar came about when Banbai rangers started reintroducing cultural burning to their land as part of the Firesticks program. Dr. Emilie Ens from Macquarie University suggested that a seasonal calendar could be produced, similar to those from northern Australia, but it could be taken further to provide specific indicators for fire management. That’s when Michelle McKemey came on board supported through the Firesticks Project, with one of the outputs of her PhD research to be the collaborative development of a fire and seasons calendar for Wattleridge IPA.

Information was collected through interviewing Banbai IPA rangers, reading scientific literature, taking observations and setting up experiments based on the prescribed fires implemented at Wattleridge. This data collection is ongoing and the fire and seasons calendar is updated as we learn more. 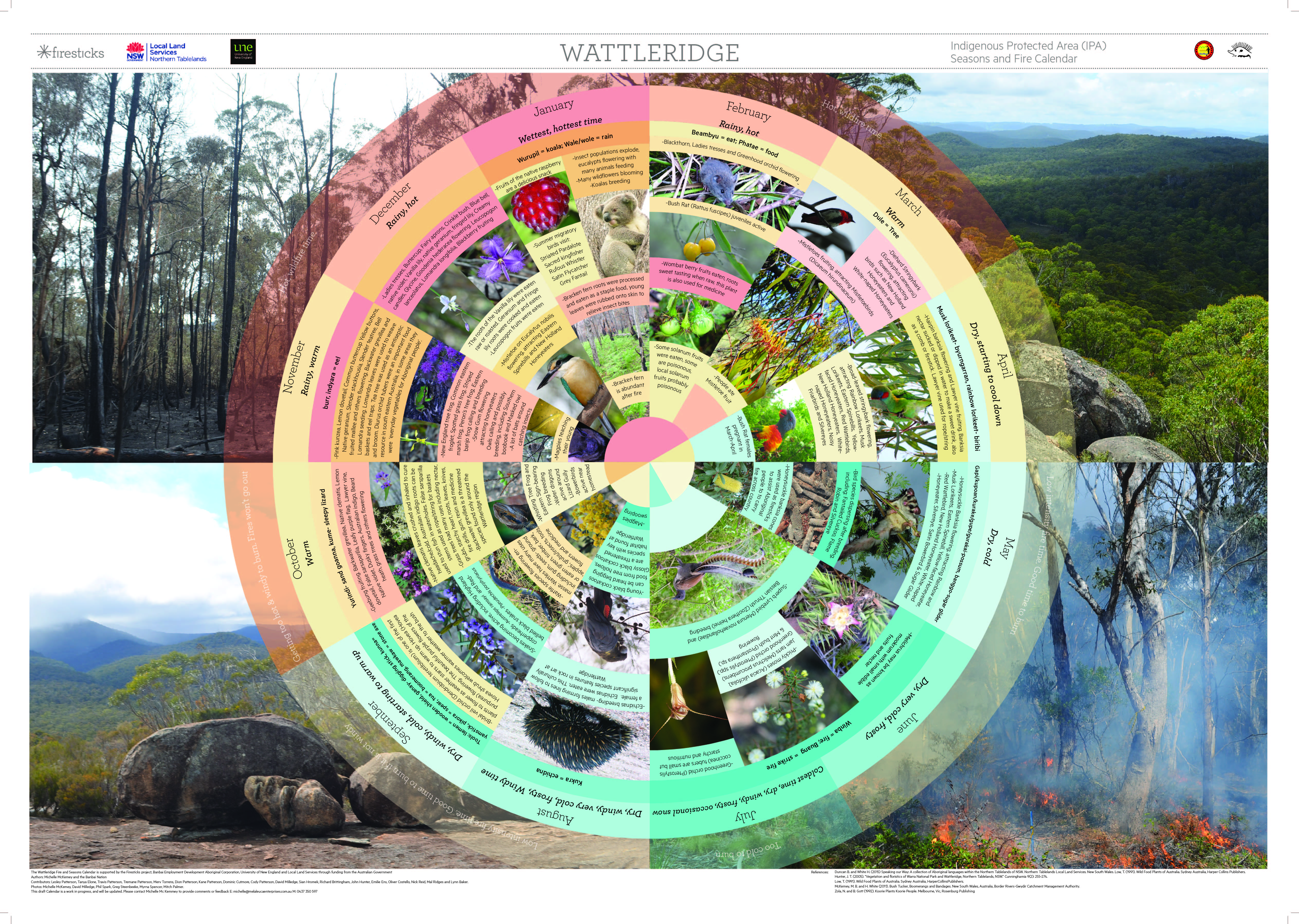 Prototype draft of the Winba = fire, Fire and Seasonal calendar.

Once we had enough information and photos, we asked Sian Hromek- Project Officer for Firesticks to develop a prototype of the poster for the seasonal calendar. Sian’s original fire and seasons calendar was a magnificent patchwork, presenting images of the species as the months changed with text for explanation. This could be described as a knowledge artefact which allowed us to develop a shared understanding of the project through an open process which required transdisciplinary thinking. We received feedback on this original calendar from many sources including the Banbai rangers ,scientists, the Rural Fire Service and even school groups.

The next step was to develop a calendar template which could allow changes as knowledge develops and also be able to be used by other groups. Lyndal Harris from September Design Studio designed this template using the Wattleridge information as a first example. With the combined visual communication expertise of Lyndal, Sian and Dr. Jacqueline Gothe from UTS (University of Technology Sydney) we now have a calendar which is adaptable to our growing understanding and the needs of other groups. 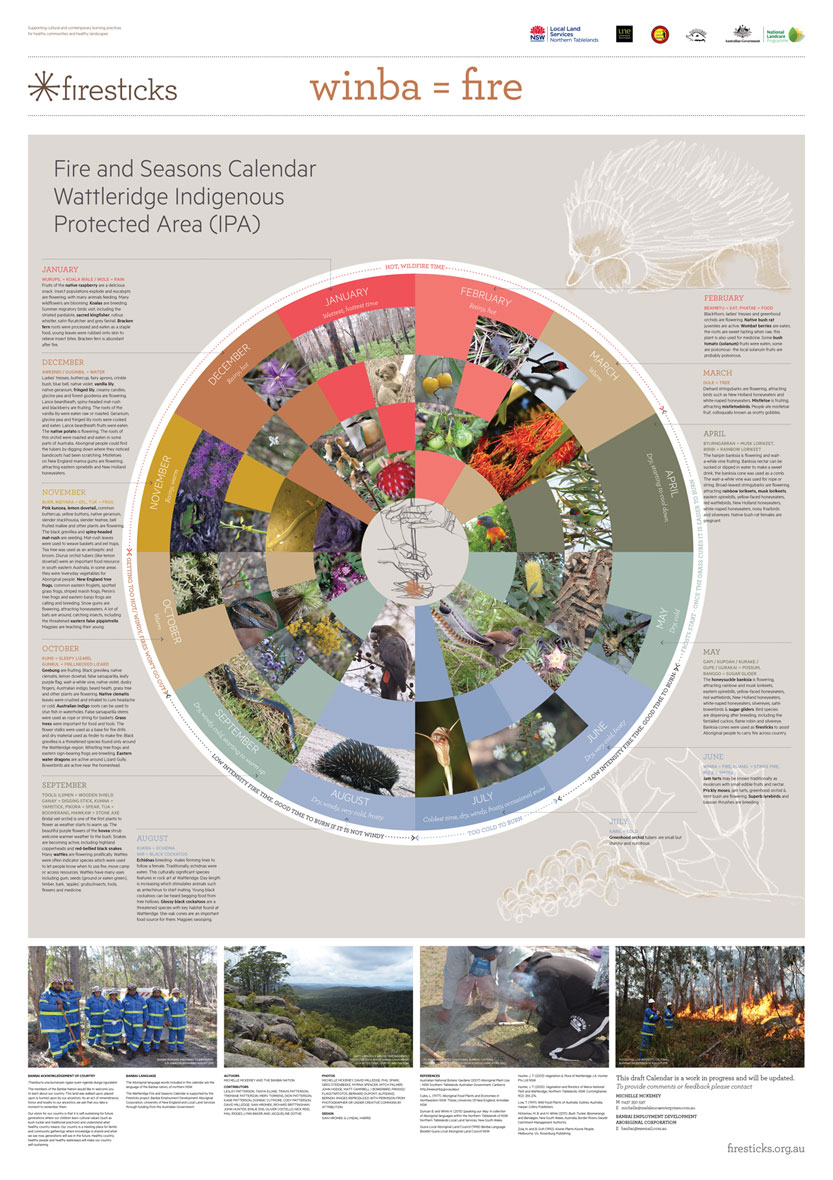 Early days… but we’ve had heaps of interest!

The first prototype of the Wattleridge calendar was printed in early 2016 but already we have had a lot of interest. Three school groups visited Wattleridge on school excursions and were fascinated by the calendar. The posters are now proudly displayed at the schools which create an ongoing link to the IPA as a knowledge hub for students to learn about Aboriginal culture and biodiversity.

Michelle McKemey visited Arnhem Land (NT) to undertake further Indigenous fire management research with the Yugul Mangi rangers at Ngukurr. The Yugul Mangi rangers were very interested to study the Wattleridge fire and seasons calendar and learn about how fire management differs in southern Australia. Michelle is now working with the Ngukurr community to develop their own fire and seasons calendar.

Some posters of the fire and seasons calendar have been distributed but many more will be printed early in 2017 after we have another year’s information to include in the calendar. It is fortunate that the calendar is designed in such a way that we can continually update it as more information comes to light.

Michelle McKemey shares the calendar with the Yugul Mangi rangers in Arnhem Land.

Winba = Fire is a great project to work on as it teaches us to be in tune with the subtle changes that occur in the landscape every day. Learning from a knowledge source that has had an intimate connection with the Australian landscape for tens of thousands of year, that is, Indigenous knowledge, is a profound way to develop a fire management tool that is suited to Australia’s environment and culture.

All other photos- Michelle McKemey or Firesticks project.