On the 26th and 27th of February Wattleridge IPA hosted the first of two sand plot tracking workshops scheduled for the Tablelands and North Coast as part of the Firesticks Project ongoing integrated fire and vertebrate pest management program. The Tablelands workshop was attended by rangers from Boorabee and the Willows IPAs along with the rangers from Wattleridge and Tarriwa Kurrukun IPAs. The tracking workshops were first discussed at the Firesticks Partners Meeting in October last year where rangers expressed interest in developing further skills to monitor native and introduced species on their properties. 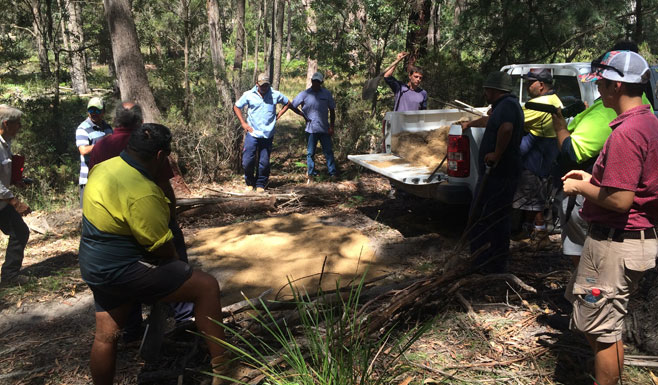 Rangers from Boorabee and the Willows, Wattleridge and Tarriwa Kurrukun IPAs put the theory into practice when setting up the sand trap at Wattleridge IPA.

Expert pest management consultant Brad Nesbitt has been engaged by the project to deliver the workshops which involved a day of theory and a day of practical application and analysis of results. The theory taught the rangers about the science behind sand trapping, how to analyse the data collected and how to identify and interpret the tracks observed in the sand. The practical application involved learning how to choose a suitable location for the sand trap, what type of sand to use and how to set up the sand plot. As an example a domestic dingo was employed to walk over the trap which give the rangers an idea of how the sand trap works.

Rangers set up the sand trap across a fire trail on Wattleridge IPA. A domestic dingo leaves its tracks on the sand trap.

In Australia the recording of animal tracks on sand plots placed across roads and tracks has been used as an index of abundance for a diversity of large to medium-sized ground-dwelling vertebrates in heathland, forest, rangeland and arid landscapes. The application of this methodology on the IPAs and other Aboriginal managed lands can give further evidence towards the importance of strategic pest management.

Brad Nesbitt and the rangers examine tracks left in the sand trap early in the morning to see what animals crossed the trap overnight.

The Workshop builds on observational and animal identification skills the rangers already had by introducing a systematic methodology and some useful technology for recording results. Dr Emilie Ens a cross-cultural ecologist from Macquarie University attended and assisted the rangers to set up Cybertracker software on their phones and tablets to record monitoring data in the field. The rangers were all very engaged in the workshop particularly in identifying the various species that had left tracks the night before. There is interest to set up ongoing programs on the IPAs, which could be further supported by using camera traps. 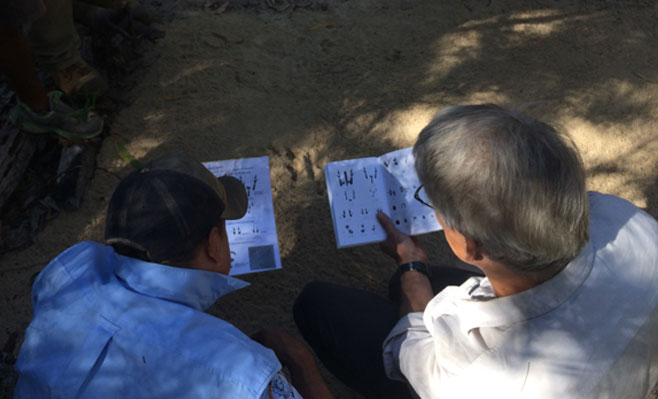 Brad Nesbitt and senior ranger from Boorabee and the Willows IPA Aaron Livermore identify tracks in the sand using the reference book ‘Tracks, scats and other traces’ by Barbara Triggs

Red necked wallaby tracks, bird tracks and feral cat and dog tracks were observed the morning after setting up the sand trap. Results from the one night of trapping are indicative of what species are moving around the area at night. Further observations over a longer period of time will give the rangers a deeper understanding of what other pest and native species are on their IPAs. This will help them to develop future management activities to help eradicate feral animals and protect the native species.

A Coastal Tracking Workshop will be held at Minyumai IPA on the 22nd and 23rd of March, with participants from Minyumai, Ngunya Jargoon IPAs and Ngulingah Nimbin Rocks rangers.