Reconnecting with the Helmet Range

Reconnecting with the Helmet Range

On Wednesday 27th of April a group of brave intrepid adventurers traversed the Helmet Range in order to establish a safe and reliable access to the property before future works are to commence. This group forms the collaborative partnership between the Gugin Guddaba Local Aboriginal Land Council (LALC), North Coast Local Land Services (LLS), Employment and Training Company (ETC) and NCC Firesticks. The partnership aims to support implementation of cultural burning and environmental restoration on the LALC properties.

The clouds lifted and revealed the view of the valley from the Helmet.

The Gugin Guddaba LALC lands are located north of Kyogle and east of Wiangaree township. There is no easy way to access the property and in effect the Gugin Guddaba lands are like an island that emerge out of the sea of farms that surround it. The neighbours on the north and southern slopes were approached about the proposed project and they are all very interested to help with best access to support the proposed works.

The main ridge line on the Helmet is covered with native grasses such as themeda and native sorghum; waypoints are marked by John Nagle (LLS) and Richard Brittingham (Firesticks Project Coordinator) to create a map of the path traversed over the Helmet.

The Helmet Range sits within the Aboriginal cultural landscape of the upper Richmond Valley. There are many special places within the landscape that are important to local Aboriginal people. It is exciting that this piece of land has been returned to the Gugin Guddaba LALC, and that it will now have an opportunity to be managed in an appropriate and culturally sensitive manner.

Andrew Johnston from Gudgin Guddaba LALC inspects the vegetation on the Helmet; Invasive weeds such as Crofton and Lantana are degrading the Eastern Bristle Bird Habitat

During a biodiversity assessment ecologists observed the presence of the critically endangered Eastern Bristlebird (EBB) on the Helmet Range as the range provides the necessary habitat required for the endangered EBB. The proposed program of works aims to enhance the habitat of the EBB by removing invasive weeds such as Crofton Weed and Lantana that are encroaching on the grassy wooded ridgelines. This will inform the focus of the a work team to specific key management areas that need to be restored for the EBB and other threatened species reliant on the grassy understorey.

The ridgeline is grassy and narrow along the Helmet.

Now that access has been established, that hard work of organising the movement of equipment and personnel to the work area may begin. More exciting stories from The Helmet Range coming soon.

Andrew Johnston from Gugin Guddaba LALC inspects a potential scar tree on the northern end of the Helmet; native orchids growing on the Helmet. 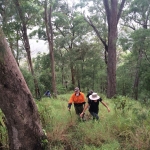 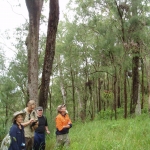 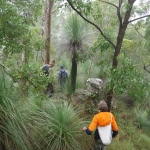 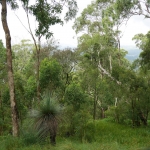 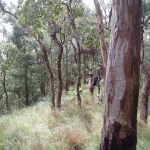 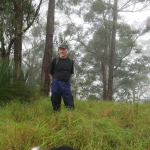 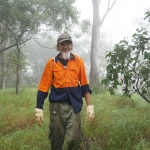 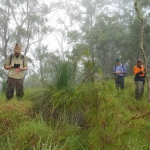 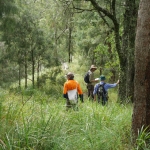 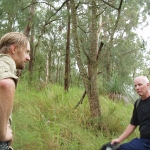 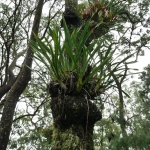 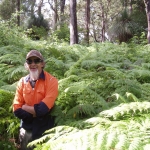 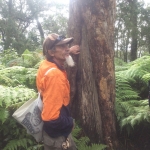 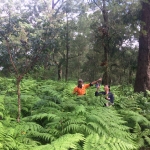 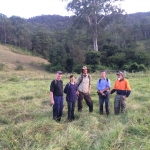