On the 14th of May rangers from Ngunya Jargoon and Ngulingah assisted Minyumai Indigenous Protected Area (IPA) rangers to successfully carry out prescribed cultural burns on Minyumai plots D and G (see map). To assist with these prescribed burns a fire contracting team Fireland Consultancy from Brisbane (Fireland) and Firesticks staff provided operational fire support, vehicles, and equipment. The Rural Fire Service (RFS) provided advice and training to rangers in preparation for the burns.

Earlier in the week we visited the Minyumai plots to work through the burn plan with the ranger teams. Test burns were conducted to assess soil moisture and burn intensity and results indicated favourable burning conditions, so the burn was carried out later that week.

On the day of the burn ranger teams came prepared with Personal Protection Equipment (PPE) supplied by the RFS, and were ready to undertake the cultural burn starting with plot D and moving on to plot G.

LHS: Minyumai rangers in PPE ready for the cultural burn; RHS: Participants gather for a discussion on cultural burning

Burn coverage was estimated at between 70-80% for both plots. Observations indicated many of the understorey wattles were killed with the majority of larger trees relatively unaffected. Patches of grass remained throughout both plots post-burn, providing temporary shelter for small terrestrial animals that may have been displaced by the fires.

Few vertebrate movements were noted during the burns apart from two Burton’s Legless Lizards moving away from the fire front in plot D. This species had not previously been recorded in this plot. A number of invertebrates were also seen escaping the fire front. Due to the moist ground, it was expected that many animals survived by retreating into subsoil burrows and crevices.

LHS: Patchy areas of grass were left throughout the plot; RHS: Burtons legless lizard previously unrecorded on this site

Wild-life cameras were set up to record any species that may opportunistically enter the plot areas post-burn. Firesticks staff and Minyumai rangers will monitor the overall effects of the burns and their impacts on target species in the short and long term as the area regenerates.

Culturing burning aims to maintain healthy grassy forest and pathways which allow access and resources for people and provide habitat for culturally significant species including:

The Firesticks team wishes to thank all involved in making the burns a success particularly the Minyumai IPA rangers and staff, rangers from Ngunya Jargoon IPA, Nimbin Rocks Working on Country rangers from Ngulingah LALC and Fireland Consultancy.

We are looking forward to facilitating more cultural burning in the near future. 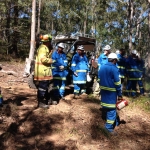 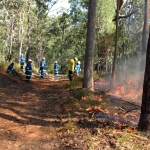 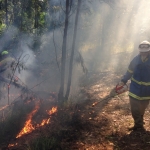 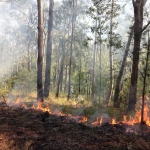 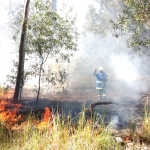 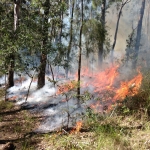 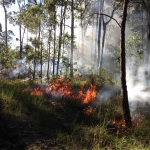 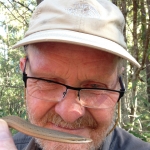 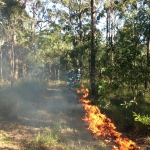 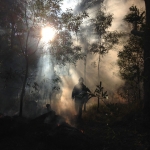 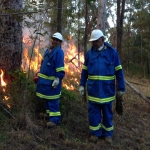